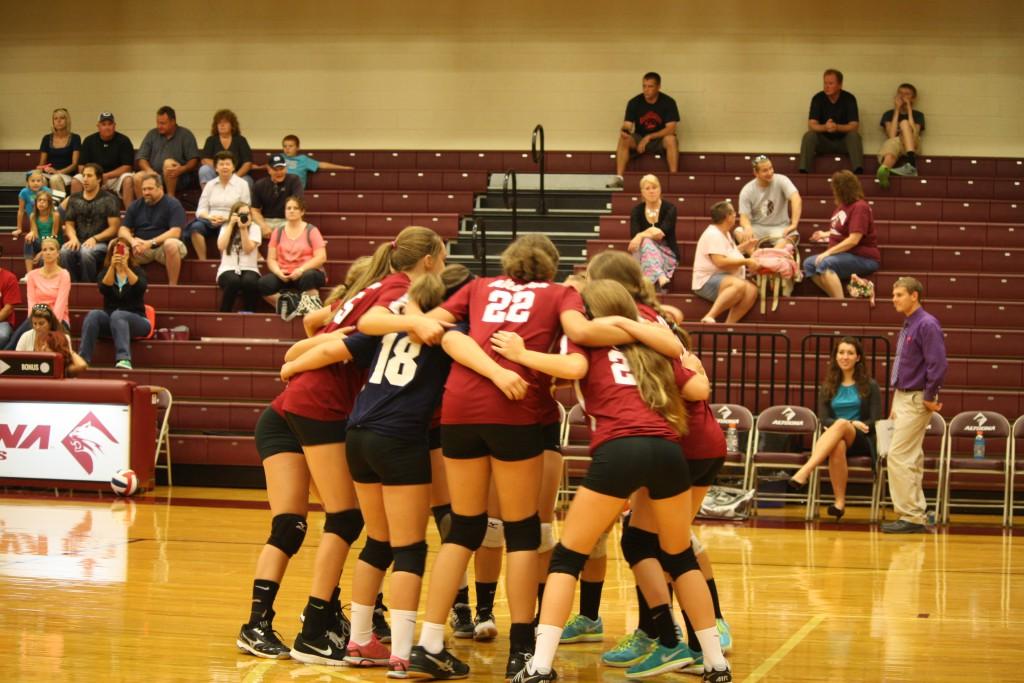 The team huddling together. As the lady spikers go against their rival Hollidaysburgh, they talk about what they need to do to win the game. Photo by Kizzy Thompkins

At this point in the school year, the season has come to a close. The junior high volleyball girls finished with an 11-4 record. The team played several games against rivals and new teams, which kept them on their toes. Volleyball is a part of each team member’s life. They all say they love playing volleyball and look forward to practice each day after school. Throughout the season, the team learned different strategies for overcoming adversity.

The girls’ season taught them life lessons on and off of the court.

“ Personally I struggled with communication on and off the court. At first I didn’t really make an effort to know my team and I regret that because we are so close, and it would have been better if it was at the beginning of the season,”  setter and right side hitter, Isabella Zavalanski said.

Not only did the team have struggles, but they also had successes. After the girls started communicating, communication was an important factor they began to have success with.

“ We may have struggled with communication at the beginning of the season, but after we began to communicate better we became a family instead of a team,”  Zavalanski said

“ Even though they are rivals it was really fun playing them and even if we lost; we fought a tough match,”  Christina Brunette, Back Row Defensive specialist (Libero) said.

The girls did not only learn on their own, but also from their coaches. Their head coach was Chris Perino and Assistant Coach was Cecelia McDonald. The girls coaches didn’t just teach them the ways on the court, but also in life.

“ I play softball and I dance. I prefer volleyball first, softball second and dance last.,Zavalanski said

“ I play one other sport. I play softball. I can’t pick; I love them both,” Brunette said

Over the season, the girls made a lot of memories. The bus trips, games and long tournament rides gave them many stories to tell.

“ My favorite memory is one time on our way to a tournament, we decided we wanted to annoy our coaches because we did a great job at our tournament. We made up our own version of “Wheels on the Bus” and substituted the words with our coaches. It was a very fun day!” Brunette said.

“My favorite memory was when I was first told I made the team. It was a very joyful moment!” Zavalanski said

Not only did the players have something to say, but also the head coach.

“I greatly enjoyed the first season as head coach of the Junior High Lady Spiker team. For a first year team, we made statements and had lots of fun doing so,” Head Coach Chris Perino said.

He also agreed Hollidaysburg was their biggest rival.

“Our biggest rival all season was easily Hollidaysburg. We faced them twice during the regular season and lost both but also played them at a tournament and split with them there,” Perino said. “As many were first year players, they continued to get better and do some great things. During the season, there were a couple things that caused us to lose but there wasn’t one thing they struggled with. Things we need to improve on would be serve receive-making it good enough that the setter never has to move, hitter- big swings so they get a kill every swing and defensively getting digs and not getting beat and finally being very aggressive at the service line. If we do these 4 things the way I want, we will win every game next season 25-0. Very high expectations for the team and those expectations will never change,“ Perino said.

Zavalanski and Burnette said what the coaches taught them and Perino told us what he taught the girls.

“The most important thing I taught them was to never give up and to believe that they can accomplish anything and believe in their abilities. They lost a match this year 3-25. They could have given up going into game 3 but they did not. They believed in each other, pushed hard and came back and won game 3. This shows what great heart, determination and will they had on the court,” Perino said.

The girls have memories but so do the coaches.

“ My favorite memory was our final game of the season, at home, against a very good Philipsburg-Osceola team in which JV and Varsity both won in 3. Varsity played extremely well and played the best they have all year as a team,”  Perino said.

The coaches want the girls to continue on as volleyball players and be successful.

“Don’t want to change anything for next year. Just want to continue to improve our skills and improve as a team. I want to get them ready for a high level of play for when they enter the high school so they are ready for Coach Price and Coach Saboe. Getting them at a higher level here at the junior high will pay great dividends for the future of the Lady Spiker team,”  Perino said.