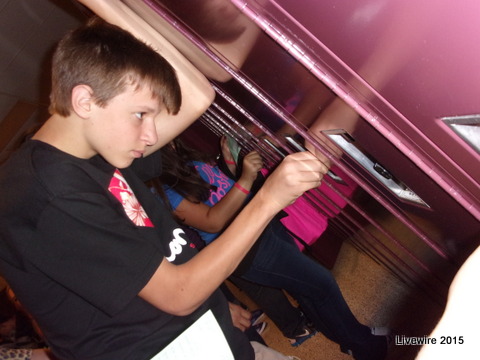 On the first day of school, Tyler Wagner tries to open his locker. He isn't thinking of the possibility of him not having on next year.

There has been a lot of talk about the proposal to change the school district; drastically. Everyone has heard at least one or two things about what is going on, but what is the actual plan?

Doctor Thomas Otto presented three different proposals. The proposals are clear as to what will happen. But, something that is not very clear is how things will work, if all three, or if any of these proposals are passed. The fact remains that there are three proposals, and they will be voted on in the near future, hopefully.

The solution to the overpopulation problem is simple. Reopen the two elementary schools that were closed only last year.  The time to change the junior high to a middle school has passed.  This option should have occurred when the school opened not now.

Having the closed elementary schools reopen would give all the elementary schools more space. If the school district would reopen these schools it could easily solve the population problem that they are worried about. These schools are fully equipped to move back into, if given the chance. The surrounding schools would lose people, this would also mean that those schools would have extra supplies that can be used in the new schools, or even be used later which could help save money.

If these schools reopened, everything could be fixed. If they go with the proposal, how would they all have the right supplies? There would be so many extra people in the school to keep up with supplies. Would students have enough lockers? What would the student-teacher ratio be?  Would all teachers have rooms?

If changes are going to happen, why not make changes that benefit all students.  Smaller class sizes would benefit everyone.  Creating a larger school would not benefit anyone.   A way of doing this could be having pre-k in its own school. Then, the first  and second grades could share a building, this idea would keep going with third and fourth, fifth and sixth.   This way all kids of the same grade would be together. This could be started in the Altoona School District as there are definitely enough buildings that this could be put into effect.

The secondary system is not broken.  So don’t fix it.  Work with the elementary system where the problem originates.

Careful consideration of every available option should take place before any decision is made.