Public speaks out during school board meeting 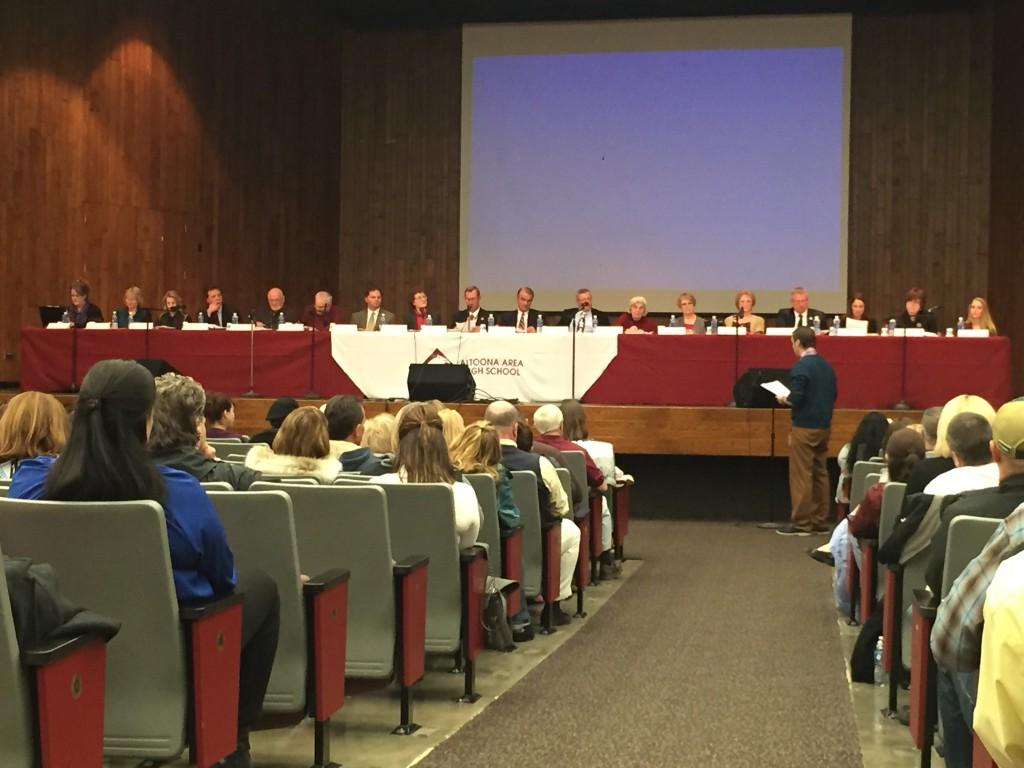 James Krug speaks out during the School Board meeting on Jan. 20

On Jan. 20 the school board held a public meeting at the Altoona Area High School auditorium. At this meeting, citizens of the community spoke their opinions on the recent proposals to the public made by Dr. Thomas Otto on Jan. 5.

At the start of the meeting, Altoona Chancellor Dr. Lori Bechtel-Wherry from  Penn State University Altoona spoke about their involvement with the district.

“I would like to talk about STEM/STEAM ignitives, science, technology, engineering, arts and mathematics. Penn State Altoona has decades long positive working relationship with AASD. I can say, with the 31 years I’ve been with Penn State Altoona we value the relationship very much.  We look forward to continuing this positive relationship with the district with any decisions they make. Recently, you may have read something in the Altoona Mirror about us, we have been discussing with members of the AASD about how we might be able to engage with businesses to support STEAM programs for grades K-12 for a four year degree to postgraduate studies to create skilled work forced internships for students.

Bechtel also felt the need to address rumors that have started regarding Penn State Altoona.

“I feel that I need to address a rumor you may have heard about, or read about in the Altoona Mirror. That rumor is that Penn State Altoona is buying the Wright Elementary building, and/or, the MHI Building. There’s no truth to either of those statements. Also, we are not advising the district as to what they should do with the schools, how they should use them or where they should put their academic programs. These are decisions entirely up to AASD. What I am hear to say is I’m very interested in continuing our partnership with the district and to continue the STEAM program with the students,” Bechtel said.

People had different outlooks on Dr. Otto’s proposals. Some people are hoping they get voted in, some hope they don’t and others think they need more time to prepare.

“During the transition for the superintendents in 2013 I wrote each board member, six of which are still here today sharing my concerns for the closing of W & J and Wright elementary. I wrote that the shut downs would cause skyrocketing class sizes, logistical measures, and present little to no cost savings. I encouraged the board to wait until the districts new leadership was in place before finalizing such a move, and suggested those possible alternatives. Of the nine board members I wrote to, only one, Mr. Johnston, contacted me to thank me for my letter. I never heard from the other eight, the school board closed before Dr. Otto officially began and it began to show impacts on our community and children. So tonight I’m talking to you in person that attempting to immediate one rushed decision with another rushed decision is a recipe for disaster,”  AAHS science teacher and past AAEA union president said.

“The number one research based solution at improving test scores is here, and that is lowering class sizes. Many people in the community don’t realize between 2008 and 2012 the district lost 36 teachers. They weren’t fired, rather retired teachers were simply not replaced, so even prior to these closings, trouble was starting. You’re entrusted as the school board to manage tax dollars you’ve done a great job. According to the Altoona Mirror, the district’s funds bounds range from 50-60 milion dollars, which places the AASD in the top three districts in the state. But as a taxpayer and parent, I worry that the pursuit of an ever higher number  is all over shadowed beneath the use of resources to better educate our children which starts with hiring more teachers, reopening schools and lowering class sizes,” James Krug, science teacher at AAHS said.

Krug’s analogy to his own home situation as compared to the district brought cheers and applause from the crowd.

“My wife and I have worked very hard to transform our house into a home for our family. A few years ago we made a mistake, we chose the wrong carpet for our home. It wore quickly, didn’t resist stains, and it already started ripping a few years later. So how to fix it? Well, we didn’t build an addition onto our home to distract us from the carpet, we didn’t move the bedroom into the living room so the bed would cover up the stains. Rather, we accepted that as much as we care for our home, we want what is best for it, we made the wrong choice. So, we spent the money to buy a new carpet and fixed it the right way. We can’t change the past, but the future of Altoona’s children rests with you. Reopen Wright Elementary, hire more teachers, and let’s work together to provide the education this community needs and deserves,” Krug said

One concern with the community is potential overcrowding in the high school if ninth graders are moved there.

“I think it’ll be better for elementary schools because there is room in the high school, but where they’ll run into problems is with the crowding in the hallways and lunch periods. With the junior high, they’re losing and gaining a grade so it doesn’t make a difference. I think it’ll be a good change,” Sarah Stuttard, a senior at AAHS said.

Another proposal that has caused stress to the community is the possible moving of the magnet school program at MHI to the Wright elementary building.

“The district has a lot of things to be considering, short and long term,” Jonathan Klingeman, Principal at MHI said.

At the end of the meeting, after the public spoke out, board member John Donley spoke his opinion on the proposals made.

“I commend Dr. Otto for realizing there is problem. We need to spend time now and in the future to make these decisions. Don’t rush the decision. The solution to the problems must be analyzed in detail. We normally have to rush this decision, but we must make sure what we decide on what will be a success for the future. We should not, we can not, nor will I support rushing to make decisions that will  have long lasting affects on our community. With that said, I will not support any proposals prior to the 2015-2016 school year,” Donley said

Parents were worried about the boundary lines of the school district getting changed due to overpopulation in some of the elementary schools. Most students don’t want to leave their current schools.

“The first thing I would ask the public to do is to look at our registration policy. Every year our registrations are due in March for the following school year. Quite frankly, not many people pay attention to those deadlines, those deadlines are there for a reason. The schools, administration and teachers need to plan for the next school year with what type of resources they need for the children. We can’t do that if people wait until day one to register. So, I say this, if you want to guarantee your child will be in the school you want them to be in, register by the due dates. If you wait until the fall, we will try our best to find a place for that child,” Donley said.