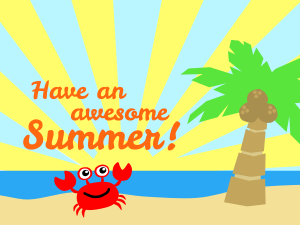 Teenagers are always complaining they have nothing to do over the summer. They also say that the summertime is boring. That is completely false. In the summertime, there are a ton of things that teenagers are able to do. Whether a teen is on the laid back or super energetic side, there is something for everyone to do.

There are a lot of people who are more on the laid back side.  There are tons of things to do. On the app Pinterest there is a board all based on DIY’s. DIY stands for do it yourself. Instead of spending money on expensive things, there is the option of creating it in cheaper way and making it different in many ways. On a nice summer day, nothing is better than sitting at home creating a project that was created in a special and unique way. Another to do for the more laid back people is to start a new series on Netflix. Sit down with a snack and drink and watch a new series. Developing new skills and interest takes time and with all the time available in the summer, teens can find something new that they enjoy.

There are teens who are aren’t laid back but not too thrilled about being outside. There are still things for them to do. Instead of spending the whole day inside or the whole day outside, they can split their day up. Starting a book inside and then finding a peaceful park to finish it is a great idea. Also, a teen can find an outdoor movie to attend. Movies aren’t that long so they won’t have to be outside for a long period of time. Also, teens can try to capture a picture of lightning during a lightning storm.

The final teen is the teen who loves the outdoors and being outside all day. Getting a group of friends together and playing active games not only keeps them in shape, but also keep them having a great time with their friends. Teens may also go on a hike. Nothing is better than climbing up mountains observing nature. Volunteering is also another good way teens can get involved. Being active in their community is good way to connect a build relationships with others in their community.