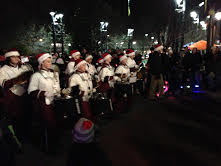 On Thursday Dec. 3, there were hundreds of cheerful residents lining the streets in downtown Altoona. Some were there to ride their floats, others to chat, to watch the lighting of the Christmas tree and as ‘the grand finale’, to enjoy the impressive fireworks. It was the annual Spirit of Christmas Parade with over 90 organizations participating and proudly showing off their floats while waving, singing and dancing.

This parade happens every year, but this was the largest the city has ever seen .The wreaths were hung and lit and the streets covered by excited people who were standing bundled up on the sidewalks, in anticipation to kick off the ho liday season. There were many types of organizations like Altoona First Baptist Church, Overflow Church, Altoona Bible Church; non profit organizations, such as United Way of Blair County, Community Action, and the Rotary Club; the Altoona Junior High and High School marching bands, Girl Scouts, Boy Scouts, local businesses such as Burgmeier’s Hauling and the Dance Shop, Doctor’s Walk in Care and last but not least Santa Claus himself! Mayor, Mr. Matt Pacifico, was  passing out candy, and TV personality, Dawn Pellas along with the grand marshall of the parade, Jodi Cessna  were announcing the names of the participating groups. The weather was seasonably cold, around 35 degrees, but the residents came prepared, the kids wore their winter gear and so the frosty temperatures didn’t bring anyone’s spirits down.

Everyone was happy and excited to be there. People were holding each other and singing along with the Christmas music while wrapped in a blanket. Kids were scrambling to grab the candy thrown on the ground from the floats and stuffing it into their pockets. They had rosy cheeks and the lights reflected in their shiny eyes.

It was interesting to see the amazing floats. It was clear that time, care and thought was put into them, making them colorful and bright. They reflected the population’s personal beliefs about what this holiday means to them and represented were also classic characters, like the Grinch and Charlie Brown, just to name a few. There was even a ‘real’ Rudolph! …also a girl standing on two horses at the same time! This event just made people grateful to live in a small town, and it showed how happy they all were to  come out and celebrate the spirit of christmas together.

At the end of the parade people gathered to watch the lighting of the tree which was beautiful. Afterwards there were amazing fireworks as a grand finale to a perfect night. It was even called The Spirit of Christmas…