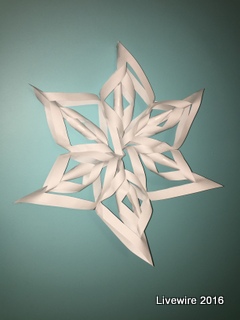 This DIY can be done in only a couple of steps and is not that hard to make. It took me less than 15 minutes to make, but the time could vary depending on how many are made. I only made one for this tutorial.

-Six to eight pieces of paper. You can use either copier paper or scrapbook paper.

Step one: Fold a corner of the paper down to make a triangle. Cut off the paper at the bottom to have only a triangle

Step two: Fold the paper in half. You should end up with a smaller triangle.

Step three: Cut three slits into the triangle. Position the scissors along the bottom fold, and parallel to one of the edges. Cut almost to the top of the paper. Keep the same distance between all three of the cuts. As you cut the next two, make each one smaller than the one before it. Then unfold the paper.

Step four: Roll the first two smallest paper lines up to form a tube. Tape the two pieces together. You should see two triangles on both sides.

Step five: Turn the diamond over to the other side. Roll the next two pieces of paper up to form another tube.

Step seven: Repeat steps 1-6 with the remaining pieces of paper.

Step eight: Join three of the completed rolled pieces by the end of the roll. Staple it together. Do the same thing with the other three rolled pieces.

Step nine: Staple the two new pieces together in the middle.

Step eleven: Display them! You can hand them from the ceiling or in a window, or set them up however you wish.