Chromebooks for next year: working to improve school 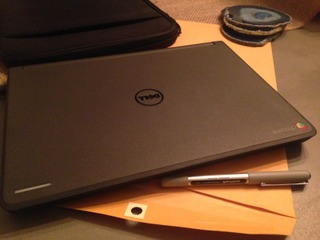 One of the Chromebooks the students enrolled in honors classes are given.

Currently only honors classes have Chromebooks. However, incoming students going into ninth grade will be receiving Chromebooks for the 2018-19 school year. Since the students will be given these computers, many of the students and teachers will be finding new ways to enhance the classroom learning experience.

A Chromebook is a computer that was made by Google and is expected to operate on the Chrome OS, which is why it’s called a “Chromebook.” The Chromebooks are used for all of the available Google apps, and with that, they will be able to utilize online websites.

“We plan to expand the 1:1 program so that each student will be given the opportunity to use technology throughout their schooling, and have an experience they may not normally have. Soon, we will be moving the Chromebooks to the seventh and eighth grade in the next year or two. Please note that even though all students will be given a Chromebook, each grade level floor must have a cart for computers or iPads, so they can use software that is not normally available on a Chromebooks,” assistant superintendent Brad Hatch said.

Currently junior high students not in honors must use laptops signed out from carts.

“With the Chromebooks, the students are able to use many resources that are not available to them normally. Because of the ChromeOS that comes with the computer, many students will be able to utilize the various applications that comes alongside the computer,” Hatch said.

One consideration in the purchase of Chromebooks is price. Three Chromebooks can be purchased for the cost of one Ipad. A Chromebook costs $199, and because of this, the school is allowed to expand the program to other grade levels.

“Make sure that you charge the Chromebook. Even though it might be at full battery, the brightness on the computer screen might drain the battery quicker. Plus, if the Chromebook does die, then the class might be interrupted when saying “oh my, my Chromebook is dead, does anyone have a charger?” It really interrupts the class when this happens,” ninth grader Aidan Pellegrino said.

Some of the teachers who were given the opportunity to use the Chromebooks are getting ready for next year and are awaiting the announcement on when they have to train.

“We had to go through a lot of training for the Chromebooks. It was definitely a challenge, but in the long run it helps me and the students I am teaching,” ninth grade civics teacher John Blough said.

With the Chromebooks being implemented into the classroom, some teachers are learning more ways to work them into their lessons.

“A couple of weeks ago we had to do a project where the students had to assume the role of a cabinet secretary. Usually we would have to go to the computer lab and spend an immense amount of time working. However, for this time, we were able to do it all in class, and it proved to be a lot easier for them and me. When the time came where they had to present, they just hooked up their Chromebook to the projector. It was really easy. Overall, the projects were a lot better than they normally were. I don’t know if it was the Chromebook or the student, but either way it has been really good towards me and them,” Blough said.

As the Chromebooks are being placed into the grade levels, the students are being given more and more opportunities to enhance their learning experience. With every Chromebook the school is getting closer and closer to being 1:1 with technology.