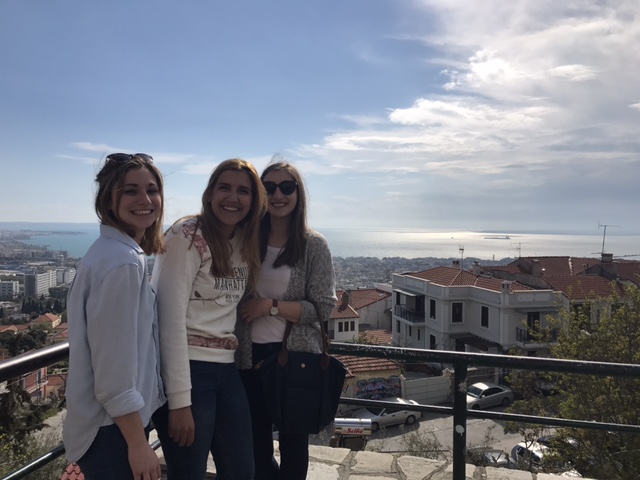 After being in the classroom in Thessaloniki, Greece for over a month and speaking with other faculty members, I’ve begun to notice more and more about the education in Greece for secondary schools. Some of the main things that I’ve noticed about their education from my secondary, private school are parental involvement, special education, language instruction and many other small pieces. These observations highlight my main views so far about Greek education.

Parental involvement exists very much at De La Salle College through after school activities and academics. The school always has various sports festivals, science competitions and school plays, especially in the spring, that parents get involved outside of the classroom, just like Harvest Day and other signature Altoona activities. I have noticed that in the classroom the parents are more involved with the primary school. As the children get older, parents slowly fade out and leave a whole lot of responsibility to their children. The school holds the students very accountable for their work, but they are not afraid to reach out to parents when the teacher feels the student needs extra help.

Another view that is very prevalent in American schools is special education. Due to this, I was curious about special education in De La Salle and other schools in Greece. After speaking with teachers, I’ve learned that special education is basically non-existent in public and private schools. In fact, there are separate schools for those who have learning or behavior disabilities. It doesn’t seem like inclusion in the classroom is a goal for the school systems here, like it is in the U.S. One teacher even said that she reached out to a parent suggesting that his son/daughter was falling behind and getting checked for a learning disability would greatly benefit their child. The parent was offended and refused to believe his child was “sick.” Apparently, this is a common reaction in schools, as there are very few students formally diagnosed with learning disabilities.

However, the teacher I spoke with also said if a student were to become diagnosed with a learning disability then differentiated instruction would be available for the child to help grades improve. Special education and learning disabilities have become common in the United States and many are encouraged to get the extra help if needed. This cultural difference made me think a lot about the differences between the two education systems.

In my school, the students are also required to know English up until they take their ECCE speaking tests in ninth grade and another language (usually French) up until sixth grade. After these levels, the students are allowed to continue on with their language education beyond the required levels in order to reach the proficiency level. By the time they finish their schooling at De La Salle, it is possible that they could be decently fluent in English, know a great deal of French and speak their native Greek language. That’s three different languages! I was impressed with this very much.

Three breaks during the school day??? Yupp, you read that right. A huge part of the Greek education system is their school days have three breaks throughout the day. I’ve found this to be true across the board in public and private schools. My school has two class periods, then a break from 9:50a.m.-10:05, then two class periods, then a second break from 11:35-11:50, two more class periods, then a final break from 1:15-1:25, and two final class periods. In total there are eight periods in the day and each class is 50 minutes long, but the breaks serve in place of designated, long lunch periods. Alright, I know what you’re thinking, how is 15 minutes enough time to eat your whole lunch, go to the bathroom and socialize with friends. Well, I’ll let you know when I figure that one out!

Each of these class periods are also lecture-based lessons until the students begin to reach eleventh and twelfth grade, then more group projects are assigned. However, for the most part, the students are in their seats the whole class period for the whole day, besides for breaks of course. Hmmm maybe that’s why they have so many breaks for the students to run around outside? Either way, it’s something that American schools for secondary and primary have put in the past, as many lessons offer more of a variety to students.