Teachers participate in the teach like a pirate book study. 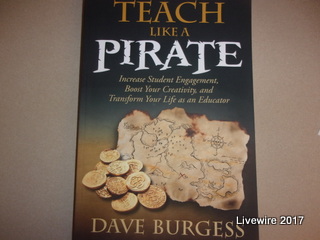 Read Mateys!: The book Teach Like a Pirate is what the teachers read from for the book study. Many of the teachers did lessons inspired from this book for their part in the study.

Ahoy mateys! This school year some of ye’ teachers took a part in the Teach Like a Pirate book study, based off the book, Teach Like a Pirate. Dave Burgess wrote the novel that describes how to increase student engagement and helps teachers bring out their inner passions for teaching.

The people in charge of the study were ninth and seventh grade instructional coaches Julie Storm and Keri Harrington. The study started at the beginning of June and it ended on April 28.

“It is where a group of teachers read the book Teach Like a Pirate, and we created an iTunes U course that they had seven assignments and seven discussions to participate in. This was for their differentiated supervision plan. It was to show that they were growing as a teacher, and just learning some new things to apply in their classrooms,” Storm said.

For Clouser’s part in the study, he did a lesson that was inspired by the book.

“I’d say that the students were more engaged. It was like the second day of school, so it really drew their attention to the lesson,” Clouser said.

“It seemed to grab more attention from my classmates and myself too. In the beginning of class, people in my class didn’t really pay attention that well, but when he started to act from the book, more people started to listen to what he was saying,” eighth grade student Piper Vallei said.

“It made us actually listen and understand what he was trying to say by him acting it out instead of just reading it, and being boring,” eighth grader Emily Chaplin said.

Depiro did a lesson about Genghis Khan, and he had his students read a biography about him.

“Yes I do think students were more engaged. Reason being, most students have never heard of Genghis Khan. They were excited to learn who he was and how he developed into a legendary emperor,” Depiro said. “I learned as a teacher you always need to re-invent yourself. It’s always a good idea to collaborate with other teachers. It’s okay to fail as a teacher as well. There are sometimes when you think that a lesson is a great idea, and that it will go well, but it doesn’t. It allows you to build and make some new changes, not just for yourself but for your students.”

For Koehle’s part in the study, he encouraged people who hadn’t done the study in the previous year.

“It gave the teachers a different perspective on how to try to get students engaged and motivated,” Koehle said.

“We picked a fun book, but a book that they would learn from,” Storm said.