Get the ball rollin’ 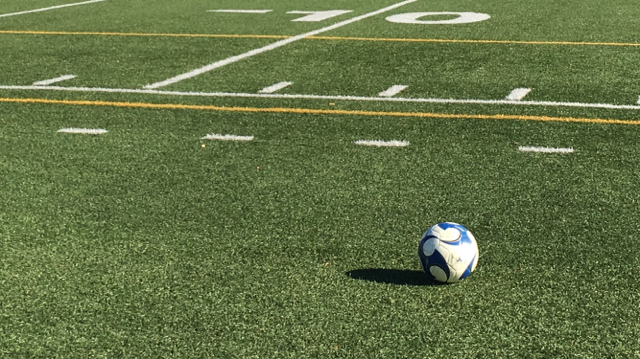 The junior varsity boys’ soccer players talked off the field this week about their season ender and the sport itself.

During the JV boys’ soccer season, the players faced many local challengers as they went up against Bedford, Mount Nittany, DuBois, Hollidaysburg and Spring Cove opponents.

On the field, these boys get a first look at their opponents, observing how the teams move. Similar to most people, these soccer players form opinions about their competitors.

“The DuBois team–I wouldn’t want to see them again because they are a one-man show,” seventh grader Michael Dieter, a outside back on the boys’ soccer team said. “Their number 11 is really fast, yet all they do is trip it up over our heads, and he runs onto it. Not a very exciting game, just a running game.”

The AAJHS boys’soccer team first played DuBois on Wed. Oct. 4, tying them at 3-3.

“Their goal didn’t look like it went in,” Dieter said.

Regarding this week’s opponent, several players agreed that out of all the teams, Bedford seemed the most unprepared. To end their season the AAJHS boys’ soccer team took home the victory against Bedford Oct. 19. The final score was 6-0.

“They weren’t really good [but] this was their first year in the league,” eighth grader Ian Cox a midfielder on the right far side said.

On Oct. 5, AAJHS competed with Mount Nittany at Roosevelt field.

“They were the hardest team [we played] and we ended up tying them,” Cox said.

“[Winning] makes us feel good about ourselves and gives us a little bit of pride,” Dieter said.

Both times that AAJHS and Somerset boys’ soccer competed, AAJHS was the victor, winning the first game 4-3 and the second game 6-1.

“We knew what we are coming up against,” Little said.