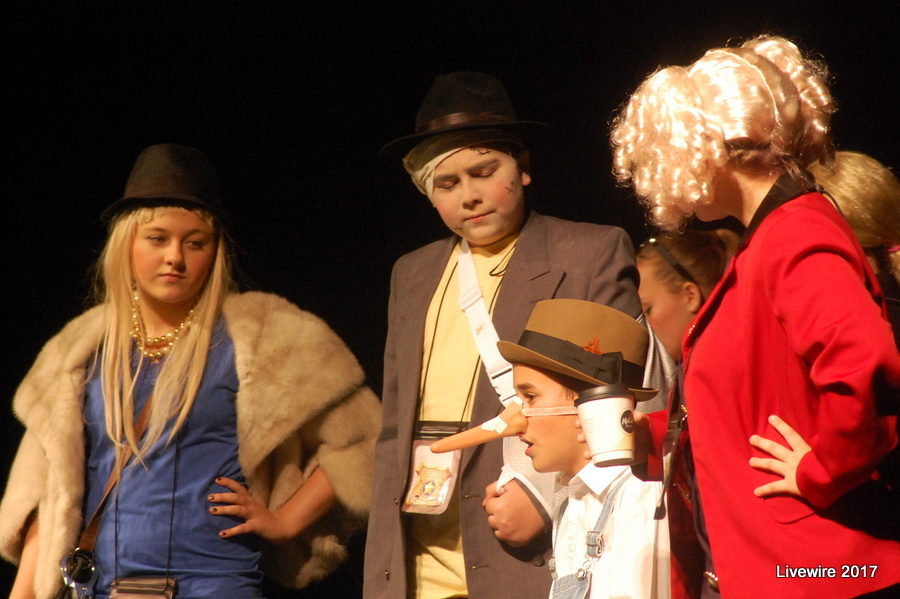 Eighth grader, Khloe Stoltenberg, ninth graders, Kaelab Ruggles and Darrah Evans, suspect Pinnochio or seventh grader, Benjamin Kennedy did the crime. They question him until they find the answers.

As the school year continues, so does the drama club, with a performance on Oct. 19 and 20.

The club picked the play, Law and Order… The Fairy Tale Unit to amuse people who love comical theater.

Maddy Reed is in ninth grade and played the role of Jill, Jillian, who is a jogger, who is interrogated for a crime she didn’t commit.

“Practicing lines is one of the best ways for me to prep before the big show,” Reed said.

Preparing for the shows took time from all of the crew and actors and actresses.

“It takes two to three weeks to get to showtime,” Reed said.

Sonia Yost is in ninth grade and a part of the technology department.

“I really enjoy doing the soundboard and dealing with turning on and off the mics,” Yost said.

The technology department does worry sometimes.

“That something will go wrong. For example, at one of the other shows the lights turned on during the show in the middle of the play because one of the actors backstage bumped the screen,” Yost said.

Alyssa Hetrick is a ninth grade English teacher who is very involved in the plays.

“This is my fourth year in charge of the drama club,” Hetrick said.

With little time to prepare, the club must to get to practicing and focused as soon as they can.

“There’s a lot to learn in such a little amount of time,” Hetrick said. “We only have about a month to rehearse, so the more chances we have to practice the better, but the closer we get to the actual show, the more beneficial the rehearsals are because they see what they need to work on, so I think they went really well.”

Actors and actresses use different techniques to get ready for the show.

“At our rehearsals, we let them run the show into a scene and then we like to give them a lot of feedback. So we will work one on one with students, teach them how to learn lines by heart and give them strategies for that, give them suggestions for how they should move on the stage and talk about even how their character should be feeling. I think that really helps,” Hetrick said.

Hetrick tried to choose a play for everyone.

“There’s something in it for everyone. The fairy tale creatures, little kids really loved that. I even saw a couple kids who came dressed up as fairy tale creatures which was adorable. But the humor is very relatable to both teens and adults. We got some good laughs last week from them,” Hetrick said.