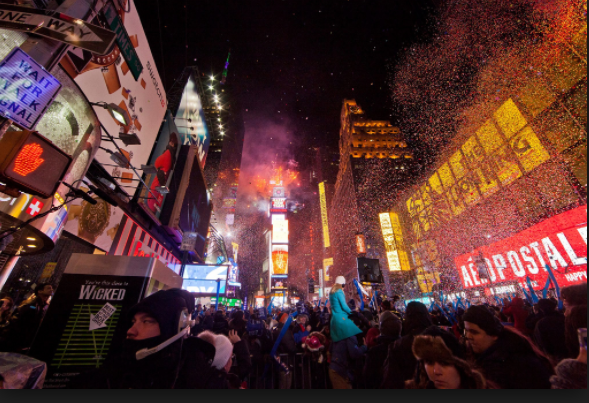 Ahh New Year’s Eve. The day we sit up until midnight watching the television to see some giant spherical ball covered in lights take exactly 60 seconds to reach its end point and suddenly everyone goes wild. There are screams all over the TV and PDA everywhere, while in reality I’m sitting there with my family. We then all look at each other like “what do we do now?”

Yes, we have all been there. But not only does New Year’s Eve seem to be a holiday only for older people and couples, it’s notorious for being the reason people want to change. This is so popular in fact, that it is called a ‘new years resolution’. People of all ages make a mental list and chat with friends about what exactly they want to change about themselves, but very few actually ever follow through.

I am also a guilty culprit. I used to be the person who would claim I would go on a diet, or swear I was going to change, but just as everyone else, this only ever really lasted maybe a month. I have never fully followed through with any of those resolutions.

Eating healthy and going to the gym seem to be the most popular ‘resolutions’ people aspire to do. Kind of convenient considering that all the holidays just passed, and we were all just shoving all kinds of seriously unhealthy foods down our throat. But this year, I considered this long and hard. I have never fully completed a New Year’s resolution, and I think they’re honestly hopeless. My honest opinion about resolutions is that if you have to wait a year to decide to change yourself, then I think you’re already failing.

So many things are wrong with resolutions. If you really truly want to change yourself, you can’t dive into things so quickly, these things take time. After everything we have all been through this year, whether it was as a nation or our own personal battles, 2018 is what we have all been looking forward to. We look to a new year as a new fresh start, when in reality, time never stops, let alone starts over. We take the earth completely rotating the sun one full time around and refer to it as a year. We all celebrate this and look at this as a new start, but is it really a new start? What makes today different from yesterday? The fact that we will now constantly be changing our 17 to an 18 for the next three months is not really the only time to focus on being the best you.

We need the reassurance that something new and fresh is coming to metaphorically put all the bad times and memories behind us and move on and start something new. Most of us refer to 2017 as a ‘bad year’ but is it a bad year or just some bad coincidences? We all hope that 2018 will again, metaphorically, bring us better things. Point us into a better direction. Make all of the bad go away.

We all want to reset the constant countdown from 365 right back to one.  We all come together to celebrate ‘new beginnings’ and ‘end the bad’ but in reality, in a few months, or what we call them according to time, we will all be forgetting about our resolutions and going right back to our normal selves. We all just need that one thing every 365 days as a break. We want to metaphorically open the book of 2018 and have it be such a good book we want to reread it over and over and recommend it to all of our friends. The past books of years we have opened, revealed a bunch of pain and suffering for those all over our world which is only a speck in our Milky Way, which is only a dot in the universe, but this is all too much for us to fathom, so we resort to keeping to ourselves, in our own little groups of friends and acquaintances, and when everything gets too much, we metaphorically restart from chapter 1.