Clay Cup hosts mug give away 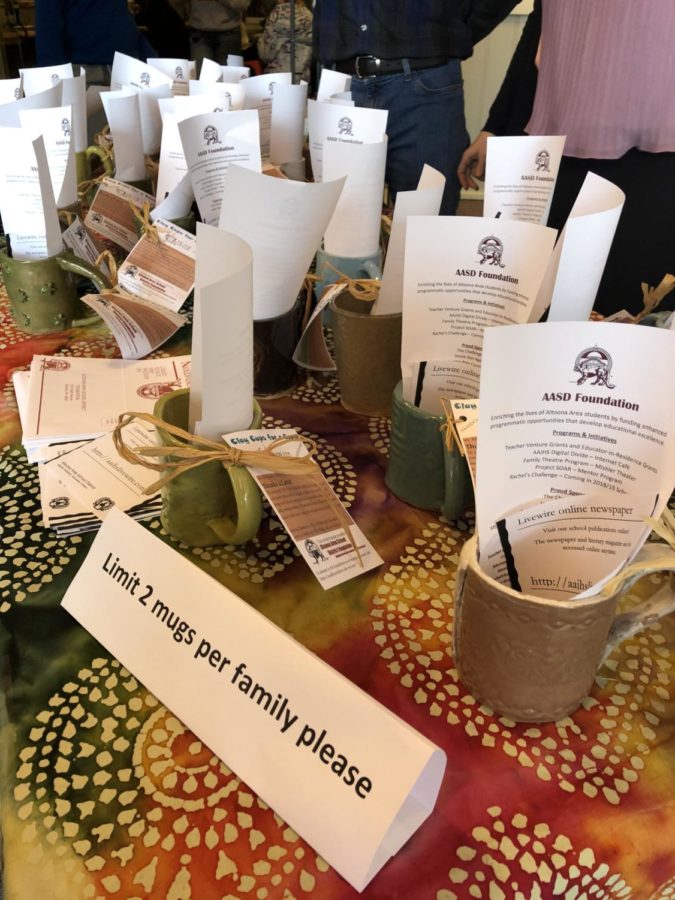 Anybody who came to the Clay Cup on March 15 could pick any mug of their choice. Any person could then get his or her mug filled with a free coffee.

On March 13 in downtown Altoona, the Clay Cup hosted an event for pottery students to hand out free mugs to whomever wanted one. Recipients of the mugs then also could fill the cup with free coffee.

The Altoona Area School District Foundation funded this project with a grant. The end goals of the project were to promote the use of mugs instead of paper cups to help the environment and gain attention for the art program and foundation for the school district.

“Everyone seemed be happy about the event, and I got a lot of positive feedback from the staff, the students and the community. A lot of people have been reaching out to me telling me how great the mugs were,” teacher John King said.

King was the person who actually came up with the idea after seeing something like it on the internet.

“It was an excellent opportunity for us to reach out to the community and show everyone what we do here at the school,” King said.

The main point of this event was to use the free mug instead of a disposable cup to help reduce waste.

“We were just trying to help save the environment one mug at a time,” King said.

“I liked working on the mugs. It was fun to work with the pottery students and express different ideas with each other about our mugs. I was glad I could work on art for a couple of days,” Livewire reporter and student Sarah Weathersbee said.

200 mugs were handed out within two hours.

Some students and staff also helped the event by working it.

“I really liked working this event because it was really nice to see the community getting involved and how excited they were,” Weathersbee said.

Before the event, posters were hung up around the school to try to promote it.

“I think the school informed the students well about this event. However a lot of people did not know about the event until the week of even though posters were hung up,” Chestnut said.

Paula Forman, the public relations director, got the event put on the news.

“It was promoted really well. I was happy with the amount of publicity,” King said.

King hopes to do this project once a year.

“I think this event should happen again because everyone including myself seemed to really like the mugs and coffee,” Chestnut said.

“The school should do more events like this and get involved in the community,”  Weathersbee said.