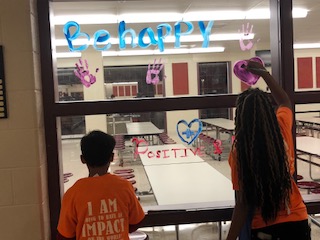 Let's Paint! Two student's that are a part of the Friends of Rachel Club paint hearts on the cafeteria windows. They were trying to spread kindness.

The Rachel’s Challenge program started this school year after faculty members became interested in it and wanted to spread kindness throughout the school.

According to seventh grade English teacher Angela Baughman, Rachel’s Challenge started about 20 years ago by Rachel Scott’s father. It happened as a result of Rachel’s death. She was the first victim in the Massacre at Columbine High School in 1999. Rachel had a paper called “My Code of Ethics.” It dealt with starting a chain reaction of kindness.

Baughman is one of the main advisers of the Friends of Rachel club (FOR).

“Rachel’s Challenge grew from a local movement, into a worldwide program. It has been incorporated into schools and communities all over the world,” Baughman said.

The FOR club meets weekly and anyone is free to join. Ninth grader Olivia Dale is a part of the club.

“It shows that we need to stay true to who we are and that we can start that kindness,” Dale said.

All students who join are expected to be positive role models during the school day to other students.

In the beginning of the year, faculty held an assembly that led to the school taking part in the club after seeing students’ interest.

“Students have just realized that we need to be kind to others,” Dale said.

The club will be holding more events this year.

“We will be doing more high five welcomes because that went over very well. Faculty and students enjoyed it. It was a good way to start the day,” Baughman said.

The students painted windows with motivational quotes on Oct. 22. Another Rachel’s Challenge assembly will take place by the end of the school year.