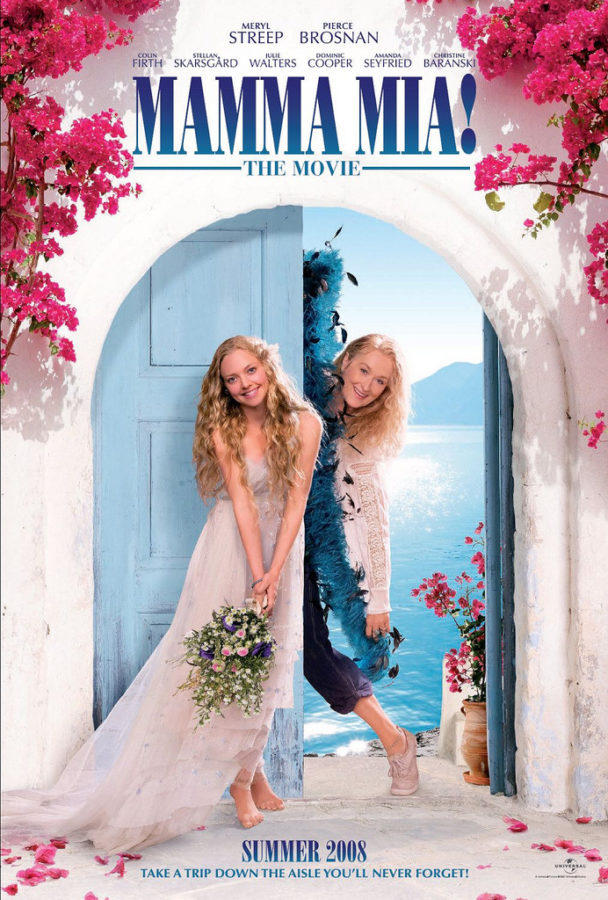 No one expected there to be a sequel to Mamma Mia! but in July 2018, Mamma Mia! Here we go again came to theaters.

The 2008 hit movie, Mamma Mia! sold over $600,000,000 worth of movie tickets worldwide. The classic musical was about a woman named Donna Sheridan, played by famous actress Meryl Streep, and her daughter Sophie, played by Amanda Seyfried. They live on the Greek island of Kalokairi. Sophie finds out that she has three possible dads. She invites all three to her wedding. Donna and her two best friends call themselves Donna and The Dynamos – which is their musical group. When Donna encounters her three ex boyfriends in her goat house, she freaks out. Sophie gets overwhelmed and passes out when the three men asked to give her away at her wedding. The day of her wedding, Donna ends up giving her away and something unexpected happens.

The movie is full of comedy and catchy songs that will be in your playlist as soon as the movie is over! When this movie came out I watched it with my grandma everytime we had the chance.

This movie is about how Sophie is rebuilding her mother, Donna’s, favorite hotel in her honor, after she died. With the help of Fernando Cienfuegos, played by Andy Garcia, and one of her dads, Sam, played by Pierce Brosnan, she was very happy with the turnout of the hotel. The movie is based on a flashback of Donna’s life. She met her two best friends at college. After her mother didn’t come to her graduation, she went to Paris where she met Harry. Once leaving him after a few days, Bill takes her on his boat to Kalokairi. She meets Sam on the island. He leaves her after she finds out he is engaged to someone else. Donna is pregnant and doesn’t know which one is the father. In the present time, Sophie is having a party for the hotel, when her grandma, played by Cher, shows up. Sophie finds out she is pregnant and knows that the father is Sky, played by Dominic Cooper.

I became so in love with this heart warming movie. It has a great story behind it, catchy songs and laughs throughout it. The soundtrack for Mamma Mia! Here we go again hit top five on “Billboard 200 Albums Chart,” shortly after the movie came out.

The soundtrack from each movie was inspired from the Swedish pop group, ABBA, making all of the tracks hits.

I personally like the first movie better. The second movie has a good story, but it would have more interest if Donna wasn’t dead. I laughed the whole time I watched the first movie. That is why I like it so much. I also love the songs.