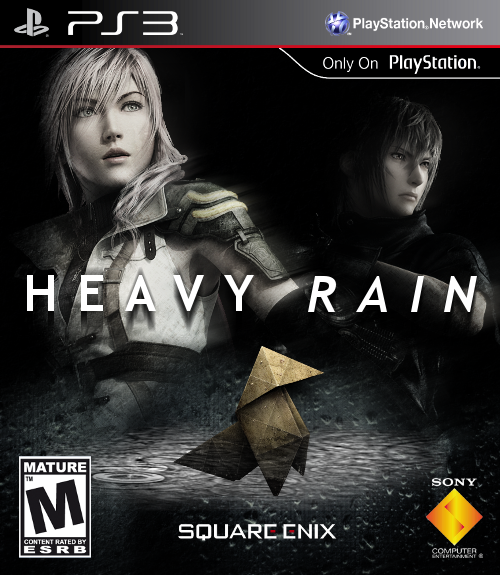 Heavy Rain is an amazing game about a father trying to find his son from the person the player knows as “The Origami Killer” who has been killing children between the ages of nine to thirteen.  He has killed eight children before the game even begins.

The player plays as four characters, Ethan Mars, Madison Paige, Scott Shelby and Norman Jayden.  Each with an interesting background that develops over the story.

At the beginning of the story Ethan is a loving father of two young children named Jason and Shawn and is a pretty good architect.  When the player’s wife and kids come home they run to the mall before the kids for Jason’s birthday party come to their house.  Jason’s birthday is that day.  While at the mall, Ethan’s wife asks the player to watch Jason while she runs into a store with Shaun.  Like in any good game Jason just starts to walk off.  When the player reaches him, Jason wants a balloon.  When Ethan buys it for him again Jason walks off again.  He goes into a huge crowd where the player loses him.  When Ethan finds him he is across the street from the mall.  As relieved as Ethan is he yells across to Jason to come back.  Excitedly Ethan runs across the street to his dad unknowing of the car coming right for him.  Ethan jumps to try and stop the car from hitting and killing Jason, but sadly the shock went through Ethan and killed his son.  It then fast forwards two years to find Ethan depressed and picking up his boy from school.  The player arrives to his home, it looks like the player moved to an apartment and finds out that the player is then divorced from his wife.  Later in the story the player takes his son to a park.  There Shaun asks if he can ride the carousel.  Ethan agrees and goes and buys the ticket.  He starts to get light headed and blacks out.  The player reawakes in the middle of the street where Jason was killed at night.  Immediately the player thinks of his son and tries to find him.  Sadly he is gone and of course the worst thing possible has happened, the Origami Killer has him!

The gameplay is amazing fun; the player has to smash certain buttons and press and hold them to complete different tasks.  This game is one of the most interesting games I have ever played.  The fun part about the game is that the player can just play through again making different decisions and have a complete different ending.  I give this game a 5 out of 5 stars.