Should students be able to use cell phones during day 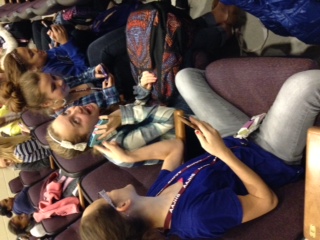 Seventh graders, Emily Henry, Alauna Feathers, Savannah Sabol, and Amya Miller use their phones during chorus practice. They were reminding their parents to pick them up after practice. Photo By: Hanna Feathers

The next reason is for safety. If students are in the school and they see a fire, they can pull out their phone and call the fire department. If students see an odd person just walking around the school, they can call the police. If someone is bullying them, the can call the office or even a teacher to come and stop the bully.

There are many schools that allow students to carry their phones with them during the day. For example, a high school in New York allows students to have a cell phone on them at all times.

Schools should allow students to carry their cell phones around with them during the school day. Phones have internet to look up information, they can call for safety, and they can call home if they need anything that they forgot.