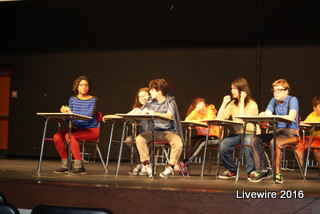 The drama club acts out a scene in the fall play this year. The students have been practicing for this play for a weeks now and will perform for the community on Oct. 27.

Lights, camera, action! The drama club is preparing for their fall play on Oct. 28 and 29. Get ready for a night full of laughs when watching this performance.

The fall drama play this year is Ten Reasons Why You Should’ve Stayed Home Sick Today, and it’s sure to have the audience laughing. The drama club is very excited to show the school and the community what they can do. Unlike most plays though, this one does not have any lead roles, all of the performers have equal roles in the play.

“I think it’s going to be a play that will keep you laughing and something that everyone can relate to,”drama director Alyssa Hetrick said.

“Last year I sat down with some ninth grade students and gave them options, and this is what they chose,” Hetrick said.

Many students auditioned for this play with only a few people making it into the cast.

“We had about 95 students audition just for the cast,” Hetrick said, “and that’s not counting all of the applications for tech crew.”

Auditions can be an easy thing for some students while others find it more difficult.

“I’m used to the auditions. I’ve been in drama for three years now so it’s kind of a normal thing,” Hann said.

It wasn’t easy picking who would make it on stage and who wouldn’t.

“Every year is hard. The ninth graders are definitely more bold and confident than the rest of the students who auditioned,” Hetrick said.

The students and teachers have not had any difficulties so far when getting ready for their performances. They already have all of their costumes in the prop room.There’s even going to be a surprise guest at the Friday night show.

“Friday night we might have a special guest principal appearance,” Hetrick said, “but I won’t tell you who!”

If you want a picture to show with your comment, go get a gravatar.