No pain. No gain. Winter sports athletes working to impress 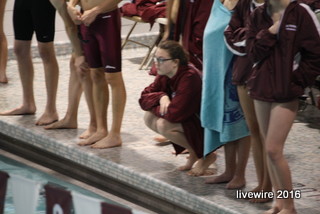 Ninth grader Faith Milliron cheers on the high school swim team at their meet on Dec. 12, 2016 against Northern Cambria.

During the winter months seventh through ninth graders can participate in basketball and wrestling for the junior high. The teams are already off to a winning start. The white boys’ basketball team has won all of their home games so far which assists in putting the team in the number one spot.

Ninth grader KJ Futrell plays on the maroon boys’ basketball team. The boys’ first game was Friday, Dec. 9, 2016. They won the game against Mifflin County with a score of 64-27.  Futrell has played basketball since fourth grade.

“My sister played professional basketball, and I’ve liked it ever since,” Futrell  said .

“Spending time with my great teammates and away games because it’s really fun traveling with the whole team,” Cree said is what she’s looking forward to the most this season.

Ninth grader Kobe Harr is on the varsity wrestling team. He has been wrestling for nine years.

Ninth graders can participate in winter sports for the high school which include gymnastics, hockey and swimming.

The high school girls gymnastics team has been warming up for their meet on Dec. 17, 2016 against Dubois.

“I’ve been doing gymnastics for eight years,” Hoff said. “My goal this year is to get all of my skills back.”

Evan Montgomery plays on the high school hockey team. He has put forth efforts to help the hockey team keeps a record of 6-1.  He has been playing hockey for seven years.

“I want to get better for playoffs.” Montgomery said.

“My mom was a swimmer and I’ve loved to swim ever since,” Milliron said. Her goal this year is “to be faster at butterfly.”

As the season continues the Altoona teams will progress and work hard to stay number one.