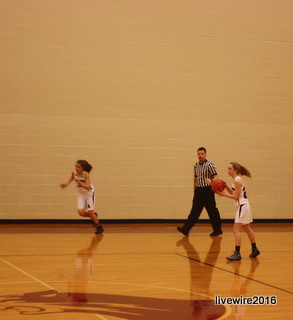 To the hoop! Seventh grader Emma Skelley runs the ball down the court to shoot a three pointer. Skelley plays on the seventh grade white girls’ basketball team but gets playing time for the eighth grade basketball team.

On Jan. 19 the girls’ basketball team played against Hollidaysburg. The seventh, eighth and ninth grade teams all won their games.

Seventh grader Emma Skelley is the point guard for the girls’ team. She also gets playing time on the eighth grade team.

The Hollidaysburg team might seem intimidating to some people, but the Lady Lions team thinks otherwise.

“We played them before and crushed them,” Skelley said.

Skelley has been playing basketball since she was five. The seventh grade team won with a score of 37-8.

“Mainly my dad,” Skelley said is what inspired her to play. “My whole family played and I wanted to play,” Skelley also stated.

The seventh grade team’s record is 6-1.

“I knew it was going to be a close game and I was almost positive we were going to win,” Lawson said.

“I look up to Stevie Webber because she’s a very good athlete,” Lawson said.

Playing rivals gets intimidating but the Lady Lions kept their cool.

“We prepared to play them and their defense and used it to our advantage, and we worked as a team,” seventh grade coach Kristen Fazio said.