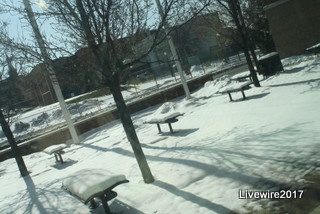 On Tuesday March 14 all schools in Blair County were cancelled due to an inclemate weather. Predictions for up to 14 inches of snow prompted schools, businesses and government to prepare for a storm.

The cancellation caused some adjustments to the benchmark schedule. Some benchmarks were pushed back, such as the guitar benchmark in Kent Martin’s music nine class, the math benchmark  in Tara Vancaster’s algebra two class and the biology benchmark in Jill Rutter’s biology nine class.

Some students enjoyed having the day off.

“I had extra time to work on my homework and benchmark projects,” ninth grade student McKenzie Leonard said.

Although students did not have school that day, the year will be moved back a day and students will have to attend until June 3.