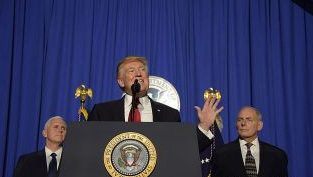 Trump has now been in office for 80 days. Within those days he has passed multiple executive orders and made plans for the country’s future. Previously in the year, students gave their opinions on Trump before the election. Now, most of their opinions have stayed the same.

Students first opinions on Trump before he became President were mixed. They said he would not be a good President for the country and Clinton would be better. Others said that Trump is better than Clinton. That was months ago, so what do the students think of President Trump now that he’s in office?

A student who is a supporter of Trump still has the same views on him as he did before he was elected.

“Yes. He is trying to fulfill his promises he said during his campaign,” ninth grader Andrew Beach said.

Another student supported Trump during the election, but does not like some of his plans for the country.

“I liked Trump better than Hillary from the beginning because of what I heard about Hillary. When I heard Trump was building a wall I was a little mad and upset and still am because that could cause another war,” seventh grader Halee Robinson said.

Other students who did not support Trump during his campaigning said they still do not support him.

“I don’t like Trump as president because it seems that he is taking a lot of things too far,” ninth grader Michael McCoy said.

Students who offered their opinion to Livewire earlier in the year gave new opinions on now President Trump.

“My views on Trump are still the same because I still think he is a good president,” seventh grader Samantha Hamer said.

“No, because he hasn’t done a lot of good for the country. His opinions do not help the country much,” ninth grader Evan Montgomery.

If you want a picture to show with your comment, go get a gravatar.