Dzurko gains headway as teacher of the year finalist 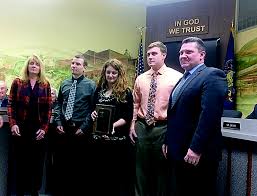 Top 12 for PA Teacher of the Year:

“It’s nice to be recognized, that doesn’t always happen in the teaching profession. It’s also an honor to even be nominated by the administration- in particular Mr. Hatch,” stated seventh through ninth grade teacher, Tim Dzurko.

The public learned of Dzurko’s achievement with Governor Wolf’s announcement, in comparison to Dzurko who received the news days in advance on April 1.

Governor Wolf and his colleague, Education Secretary Pedro A. Rivera, talked of education during this announcement- Rivera stating, “Teaching is more than a profession — it is a calling.”

Dzurko has been a teacher at the Altoona Area Junior High school for 21 years, demonstrating Rivera’s quote above with his long-standing achievements surrounding his area of expertise: the Technology and Engineering Education Department.

Some of his achievements include his advisory with Rachel Manack of the AAJHS Technology Student Association, his creation of Junior Paw Productions and his work in having the AAJHS Technology and Engineering Education Department receive the 2016 Pennsylvania Middle School Program of Excellence Award.

Many students are unaware of this honor as shown by the 58 of 68 students surveyed not knowing what the award was when asked.

“It’s probably like an award given to a teacher who does a great job and influences students,” eighth grade student Sarah Weathersbee guessed, basing her reply on the award title- coming in closest to what the 2018 PA Teacher of the Year award actually is.

In response to those who did not know, the PA Teacher of the Year honor is an award that recognizes a Pennsylvania teacher for his or her personal contributions to the educational community, it also puts that certain teacher in the running for the National Teacher of the Year contest.

Before a teacher like Dzurko can be placed in such a running, he has multiple tasks to complete and steps he needs to take in order to advance through the ranks.

“To start out there were several hundred nominations, and then they [SAS] narrowed us down to 35 semi-finalists,” Dzurko said.

Before he was selected for the top 12, he had a long process to go through involving multiple forms, letters of recommendation, philosophy of education information, 30 minute interview phone calls, and background information on himself and his work.

The final step of this process for Dzurko is submitting current lesson plans and a 40 minute video lesson with the students interacting, and then completing some additional interview segments.

According to head principal, Lori Mangan, this should be easy for Dzurko because, “he has always gone above and beyond for his students and takes on new initiatives.”

“I truly was not surprised at all that; once he was nominated he progressed and made it into the twelve finalists, he certainly is deserving of that,” Mangan said.

Students also feel Dzurko is deserving of this honor, and there were various things about his class they liked.

“I liked it when we got to make the charging stations in the woodshop,” eighth grader Macie Scott said.

“He has a nice personality; he’s very kind and funny in class,” Weathersbee said. “He makes tech-ed fun.”

“The entire process has been intriguing.. It’s also been a great learning experience for me, causing me to revisit some educational strategies and things like that. In December, I’ll be attending the SAS Institute Conference at Hershey Lodge… that is where they will announce the Pennsylvania Teacher of the Year,” Dzurko said, saying that whether or not he wins, “I’ll continue to evaluate the teaching strategies that I use in the classroom- It’s all to benefit the students.”

Sites for more information concerning Dzurko and his current achievements: