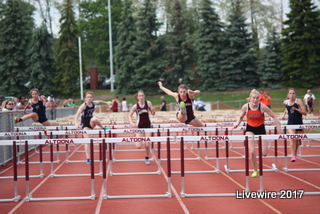 Starting in March, ninth grade students could participate in spring sports for the high school. These sports include baseball, softball and outdoor track.

“Kiski prep was the easiest and Hollidaysburg was the hardest,” Umbleby said.

Ninth grader Delaney Crider plays center field for the softball team.The team had a record of 10-10.

“It’s been good. We weren’t doing great in the beginning of the season but then we came back and won a bunch of games,” Crider said.

Crider plays on the varsity and junior varsity softball team.

“The game against Clearfield was probably the easiest and Hollidaysburg was the hardest,” Crider said.

Ninth grader Ben Tofano throws for the Altoona track and field team. He holds the shot put record of 45 ft 11 in and a discus record of 131 ft.

The district meet took place on May, 18. The boys’ track team placed second out of the eight teams.

“I was doing good in the beginning of the season, I had some trouble with technique in the middle but I did better today,” Tofano said.

While students are sitting in school, the athletes are out participating in games and meets. Don’t forget to go out and support your classmates during their spring activities.