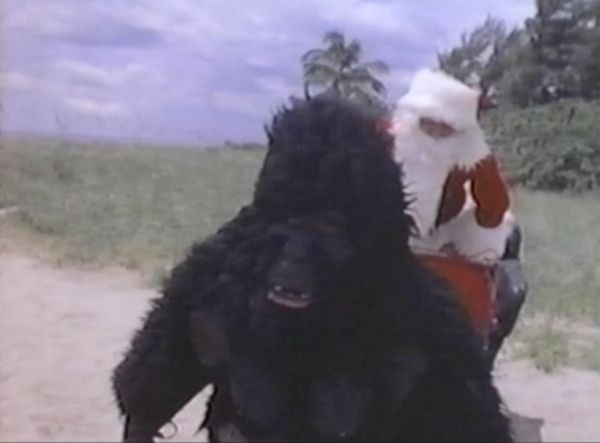 Rated one of the worst Christmas movies of all time by critics, Santa and The Ice Cream Bunny is 110 minutes of my life I will never get back (actually more, because I watched two versions of it).

The movie begins with children acting as singing elves making toys in Santa’s workshop. A little girl (elf) looks out and sees that the reindeer have returned, but Santa is nowhere to be seen and the kids start singing again. Right away viewers can tell this movie is cheap. The sound was barely audible and the set was painfully fake. The movie then cuts to the movie’s “plot,” which is Santa stranded on a beach in Florida, after he was abandoned by his reindeer due to the heat. Santa begins to whine and complain about how hot it is and how he needs to get back to the North Pole. 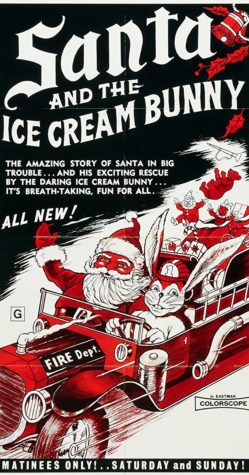 It wasn’t even five minutes into the film when things started getting more weird as Santa telepathically calls a bunch of neighborhood kids to help him and next thing they’re all running to help Old Saint Nick. Rather than the children helping him together, a person dressed in an ape suit tries to pick up Santa and his sleigh but fails. Did I mention Santa just sat in the sleigh the whole time as the ape tried to do this? Would it kill Kris Kringle to get up? Or even better, get up and walk to somewhere else instead of staying outside? The children bring in more animals to help Santa such as a boar and a sheep. But if the ape couldn’t do it, how could a sheep do it or a boar? I don’t understand the ape being there, but at least why not bring in the strongest last? Man, I really hate this movie. After all else fails, Santa sits down and tells a story to the children.

But neither the Jack and the Beanstalk tale or Thumbelina is significant to the plot . . . so why am I even mentioning the fairy tales? Because each fairy tale takes up the majority of the movie! I’m not joking–almost the rest of the movie is about these stories. These fairy tales turned out to be previous films by the director who just stuck them into this Santa film. Out of the 110 minutes of the Jack and the Beanstalk version, 77 minutes is about the fairy tale and only 33 is about Santa. Halfway through the movie I forgot this movie was even Christmas-related. And it’s far worse with the Thumbelina version, because the Santa part is exactly the same and 33 minutes, but this version runs for 122 minutes, which means the Thumbelina fairy tale ate 89 minutes of it! If I was kid and I saw this movie, I would be ‘out’ about halfway in.

As bad as the Santa part was (and wait to we get to the Ice Cream Bunny in the end), the “Jack and the Beanstalk” part was worse because this was the part in the movie where everything got really bad, like really lousy. They had a “special effect” I’ve never seen in any other bad movie, and I still can’t believe I saw it–to create the “illusion” of the size difference between Jack and the Giant, they filmed the Giant scenes separately, then they literally placed Jack in front of a screen with the Giant scenes playing. It was horrible.

And then there was the acting which was mostly by the Giant (as Jack was shown only sneaking around the castle door). The movie attempted to portray the Giant as a massive, terrifying, vicious, beast-like man; however, the Giant came off as anything but that. The Giant was just a hairy guy that yelled all his lines (use your indoor voice!), who also somehow managed to do this without emotion. He never sounded truly angry, and he couldn’t even sound surprised when discovering someone had stolen his golden hen!

And the golden hen itself wasn’t real, it was similar to a duck decoy painted gold. They couldn’t even afford a real hen? (Yet they paraded farm animals in the opening.) Now, that’s sad.

Another thing that was off about the film was that the items the Giant had, such as his bowl, his chair, the table, and his spoon, were humongous. For a giant that sounds about right; however, the Giant was just a regular guy so the objects around him made him seem smaller. It would be as if a toddler sat in a big teacher’s chair.

And then we come to the terribly disappointing ending which introduces to us in the last twelve minutes to the “Ice Cream” Bunny. After Santa has finished telling the story to the children, the Ice Cream Bunny comes to the rescue, riding in an old fire truck (not even an Ice Cream Truck) on his way to help Santa. The Ice Cream Bunny backs his truck up to the beach, and Santa just hops in and thanks the bunny for helping him. However, the bunny never responds–he doesn’t have any lines! He just nods his cheap, oversized costume head in response. His left eye kept getting stuck and would shut frequently. That was about the only time I laughed in the movie, and it was at the film, not with it.

How frustrating. I wasted my time watching this movie and this is how it ends? What a joke. The only reason I wanted to watch this movie was because of this character. In the trailer and previews, the Ice Cream Bunny has a comedic look to it; almost as if this character would be a funny sidekick or something. Well, I couldn’t have been more wrong. I don’t even understand why the title is called “Santa and the Ice Cream Bunny” when both characters get little screen time and even less dialogue.

Overall, I agree with the critics that this movie is the worst Christmas movie in existence. I would rather watch a Paris Hilton movie than this atrocity again, and that’s saying a lot. No one should ever be asking 20 questions a minute in disbelief during a movie like I was. Why is Santa’s beard falling off? When is Jack going to stop singing? Instead of telling the kids a story, shouldn’t Santa be doing something useful, perhaps getting back to the North Pole? In the end, I do sympathize with a having a low budget–but there’s no forgiving the horrible plot and falsely advertising this as a full Santa movie, when either version is mainly a previously filmed fairytale stuck in between a pathetic Santa and an Ice Cream Bunny that has nothing, absolutely nothing, to do with ice cream. I was prepared to like this movie just from the crazy title, but I couldn’t do it, and I’ll never give it another minute of my time. Do yourself a favor, and never, and I mean never, waste your time watching this lousy abomination of a movie.