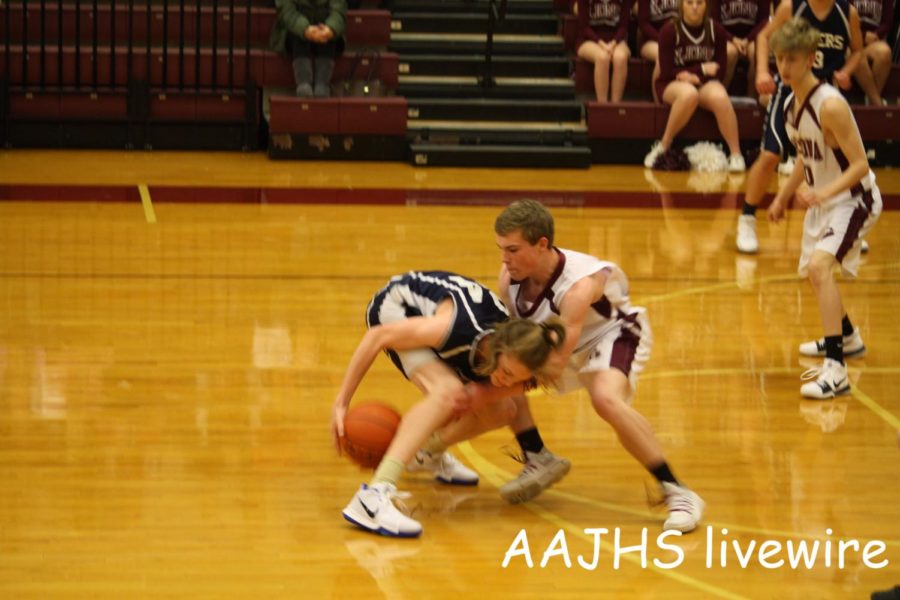 Give It! Ninth grade basketball player, Kyle Pheasant tries to steal the ball from his Holidaysburg opponent. Pheasant was successful and was able to pass the ball to another AAJHS player.

Ninth grade maroon boys are at the record of 0-5. The maroon boys suffered a loss to Mifflin County of 27-18. Maroon boys played Park Forest and won 33-29.

“We only won because we prayed. We dedicated our game to the Savior himself,” ninth grader Mehki Perez said.

Ninth grade white boys just lost their game to Hollidaysburg with a score of 48-46. Edwin Franklin went in for the game winning shot, but missed.

The ninth grade girls are at the record of 0-8. They played Hollidaysburg and Mijanae White did the jump ball. They lost 49-37.

Players must adjust to winning and losing.

“It’s (losing) unnatural because we are used to winning,” Perez said.

Perez has played on the Mt. Lions team for three years.

Each team hopes to do well with the remainder of the season.

“ I think we started off bad but we’ll probably end up doing really good,” Perez said.

The boys ended up losing to one of Altoona’s biggest rivals, Hollidaysburg Tigers. However, players are excited a new player has joined the team.

“We got a transfer named Kyle Pheasant, and he straight sauces,” Perez said.

Kyle originally played for Hollidaysburg but moved schools in the 2017-2018 school year.

The team lost to Hollidaysburg however.

“I don’t feel anything. They got lucky. We fell asleep in the third quarter, that’s it. We’ll get them next time,” Perez said.

The ninth grade white boys’ basketball team evened their record at 1-1 with a 52-27 victory over DuBois.  Scott Lawhead led the way with 19 points.  Nate Cornelius chipped in with 8.  The team opened up its home schedule on Tuesday when they host Hollidaysburg. They lost to Hollidaysburg 48-46 making their record 1-2.

The eighth grade white boys suffered a loss to Elk County. With the team merging with ninth grade, Nate Cornelius scored the most points, but not enough to bring the team back from the 12 point lead Elk boys held over the Mt. Lions. Eighth grade boys’ white lost to DuBois, 31 to 35. High scorers were Jayce Hettinger with 15 and Matt Moyer with 10. Boys’ eighth grade white defeated Hollidaysburg 46 – 30. High scorers include Jordan Lestochi with 17 and Lucas Muffie with 10 points.

“I think we’ ll do pretty good because of the draft,” Carey said.

Carey was the highest score in his most recent game against Dubois.