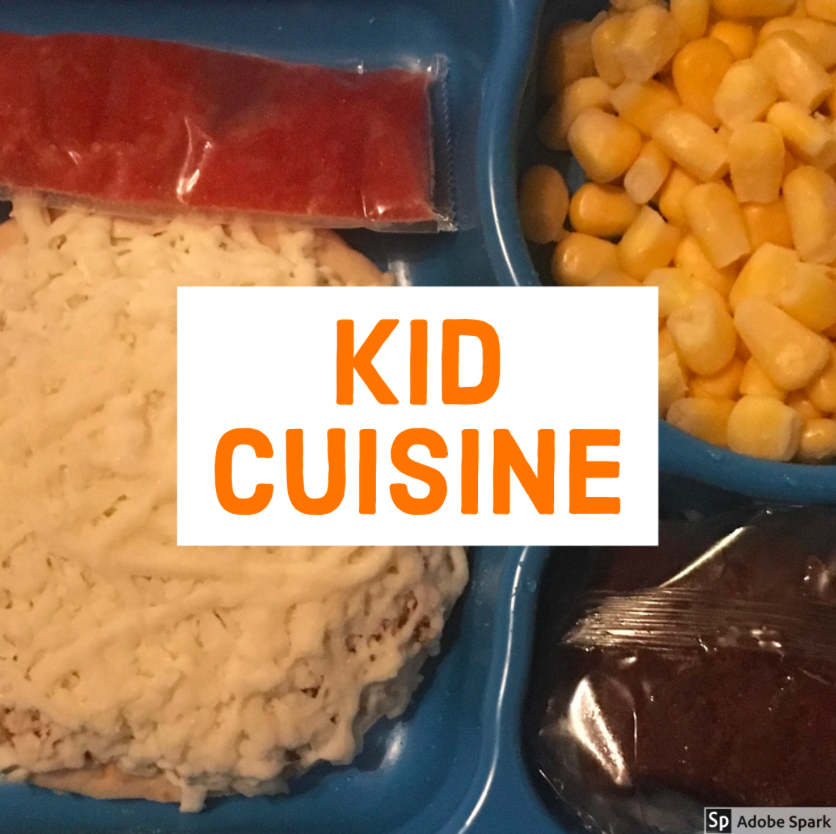 Easy dinners for kids! Created in 1990, Kid Cuisine is a brand of packaged frozen dinners for children.

If you know any fast food restaurants that I haven’t gone to, please comment!

I know what you’re thinking–didn’t I already do Kid Cuisine? And the answer is yes, I did, however since Kid Cuisine has so many choices I decided to give to this kids’ meal another chance because, hey, I’m a nice and forgiving person.

Cheese Pizza
What I immediately didn’t understand about the pizza was the fact that the pizza sauce was to go on top of the cheese. In preparing the pizza meal, the sauce comes in a separate packet, which is to be defrosted by being placed in a bowl of hot water. But the cheese wasn’t in a packet–it was already on top of the pizza. That really confused me because every pizza I have ever received always has the sauce underneath the cheese–that’s just how it is. Yet to be truthful, the pizza sauce being on top did not impact the taste at all–this pizza actually tasted decent! That’s right–a food from Kid Cuisine actually had an okay taste! But this doesn’t mean that there weren’t any cons; the pizza crust was very thick and at some points was difficult to bite into and chew. However, the texture of this pizza didn’t make me gag, which is a clearly a positive. I do have to say though that compared to Lunchables this meal doesn’t cut it. Lunchables pizza is far better than Kid Cuisine’s pizza without a doubt.

Corn
As the first Kid Cuisines meal came with corn, and because it was terrIble, I really tried to avoid this side dish. I looked at Kid Cuisines meals hoping I would find at least one without corn, yet corn seems to be a permanent side dish in all of Kid Cuisine’s kids’ meals. As I said in my previous review of Kid Cuisine, the corn was flavorless and, no surprise, it still is. I didn’t mind the corn as much this time, probably because I was expecting the bland flavor.

Fudge brownie
The brownie was alright–not the greatest but not completely repulsive. This brownie was very chewy which was somewhat displeasing, yet the good chocolatey taste made up for that. In the first meal I reviewed, the chocolate dessert, which was pudding, was great and the best part of the meal, so Kid Cuisine does have decent chocolate desserts.

Final verdict
Overall, this kids’ meal was not that bad but not that great, which is much better than the previous Kid Cuisine kids’ meal. If you want to purchase a kids’ meal from Kid Cuisine, I would definitely recommend getting this one instead of the chicken nuggets.