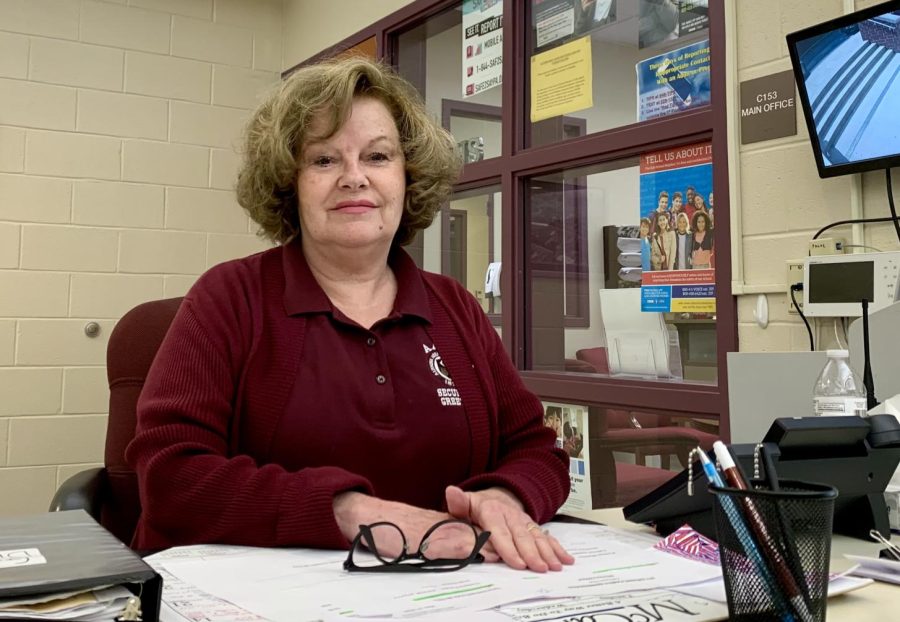 Secured. Peters pauses her work for a photo. She was the only one from her family to go into the security field.

A security greeter talks past, present and future

Peters described being a security greeter as her “retirement job.” She had retired from retail before, having the soft-line supervisor position at Sears. Peters lasted about three months before she started searching for a job again. She found the security greeter position online, applied and was accepted.

Peters explained why she chose to be a greeter. She said, “I like meeting and greeting people. And the security part was something I felt I could do also. I brought my experience with people to the job…I had [also] worked at Kids Mountain for a few years and took my children there with me. So I was used to being around young students.”

Peters reflected on the working environment she enjoyed throughout her career with the students and security staff. She spoke about the special things that helped her on her way.

“Our team with police services, from our manager…on down to the officers I’ve worked with over the years and the other security team, have always been helpful and very welcoming,” she said.

Our team with police services, from our manager…on down to the officers I’ve worked with over the years and the other security team, have always been helpful and very welcoming.”

Peters also talked about what she is going to miss most about the job.

She said, “Definitely the students. And I’ll miss the team…cause I’ve worked with some really, really nice, interesting people.”

She also described what her history in the school was like and what she gets to see at her job every day.

“The most interesting thing is I find the school is very eye-opening as to what’s going on today, what the kids are interested in. Unless you work in the school, I think you don’t really have an idea of how hard everybody works and how much of an effort everybody makes. When you look at it from the outside, you don’t see that on a personal level. And I just think [it’s] very amazing at the work everybody does,” Peters said.

Additionally, Peters also shared what it means to be a security greeter and some advice for others.

“We all bring different personalities… Everybody comes from different backgrounds. I would say be kind, be respectful and listen. Because when you’re talking to parents a lot of times they’re emotional and they just don’t understand the process. If you reassure them that you can have somebody to speak to them or how to get in touch with someone or how to direct someone, it takes away a lot of the anxiety that parents come in with,” Peters said.

Peters discussed what she is planning to do after she is retired and has left the security team.

“Definitely spend more time with family. And I’m going to babysit a new grandbaby… Mom’s a teacher. So I’ll be there during the teaching year, helping out,” she said.

Although Peters’ career as a security greeter is coming to a close, the people she worked with won’t be any less remembered.