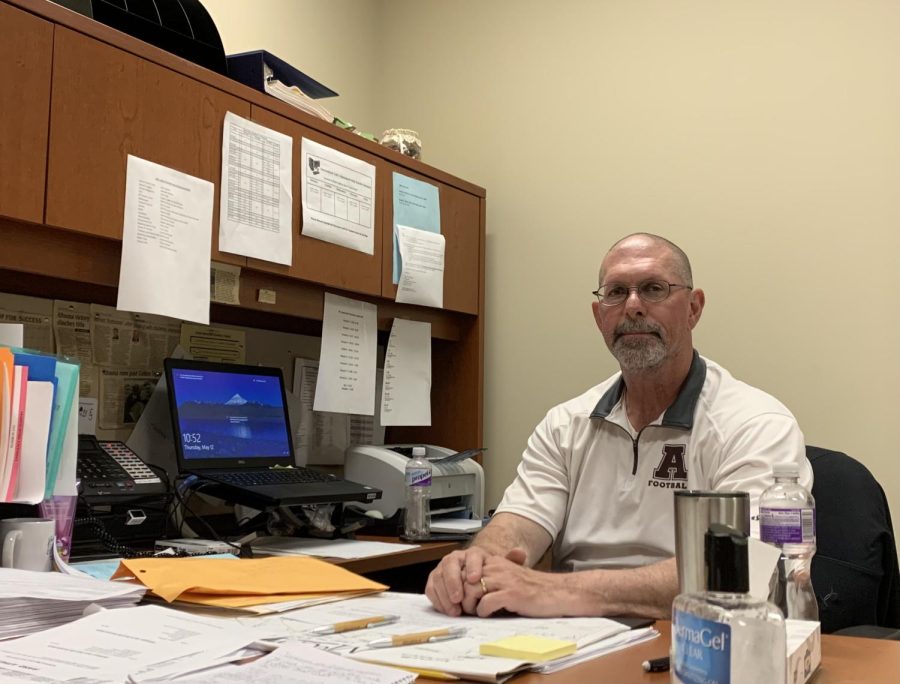 Retirement. Luciano takes a break from guidance work for a photo. He had many different teaching-associated positions over the years, following in the footsteps of his father.

A guidance counselor talks past, present and future

Luciano’s journey began at Roosevelt Jr. High. He worked there for one year. Afterwards, Luciano went to Meyersdale High School for one year and Ebner Elementary for two years, teaching third and fourth grade. Then, he went back to the junior high.

Luciano described what he did in preparation for his career.

“My dad was a teacher, so when I went to college, I ended up getting my teaching degree in special education. And then, just those first couple years, I thought about going back to school to get my guidance certificate. So I did that actually in the first five years of my career. But it wasn’t until the last 14 years that I became guidance counselor,” he said.

Luciano earned 45 credits at IUP (Indiana University of Pennsylvania). With his guidance certificate and teaching degree, he embarked on a journey that would lead him to eighth grade guidance counselor.

Luciano reflected on the students and staff throughout his career who made him feel special.

“There’s been several teachers and students and student athletes. I’ve coached a lot of years, so I have a lot of special memories there,” he said.

When leaving the workplace, Luciano talked about what he would miss most about his job.

The whole career was an experience, a learning experience all the time. I’ve only been in guidance 14 years and I’m still learning about it.”

“Just helping kids, you know, is the main thing I’ll miss. I do plan on coaching a little bit more. So I’ll still be able to be around kids. And just the faculty. I’ve grown some good relationships over the years with a lot of teachers here,” Luciano said.

Overall, he thought that his whole experience has been a learning one.

“The whole career was an experience, a learning experience all the time. I’ve only been in guidance 14 years, and I’m still learning about it. People over…time that just helped me out through it all,” Luciano said.

He also offered some advice to others that might take a position similar to this one.

“Obviously, you have to have compassion. Be a good listener. You have to want to help kids,” he said.

Luciano plans on getting involved in coaching again and spending time with family members after he is retired.

“I have three grandchildren. So I’m sure I’ll be watching them a little bit here and there. Like I said, I plan on coaching a little bit. See how long that lasts… I’m definitely gonna coach football for the high school. Wrestling was a one-year [thing] … Possibly I’ll do track as well at the high school,” he said.

Luciano’s career as an eighth grade guidance counselor may be coming to a close but his mission to help kids isn’t.